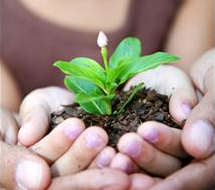 Several weeks ago we planted some tomato plants in our backyard.

One squirrel has figured out how to tip one of the feeders over and spill its seed everywhere.  Now, there are all kinds of weeds growing in the flower bed near the feeders and tomato plants.  I mentioned them to Nancy (code for “You have some weeds to pull.”).  She then told me that those are plants growing from the seeds that fell out of the bird feeders and took shallow root.  Using no code whatsoever, she told me that they won’t be hard for me to pull.

Though we intended the seeds to give life to the birds, the thieving squirrel made sure they fell to the ground.  Now, given time, those seeds born of stolen seed will produce even more seed.  Sometimes, what we intend for one thing becomes something else better than we could have ever imagined.

When the bombs went off in Boston this past week, two things happened.  First, a lot of people were killed or maimed for life, not to mention those who will live with emotional scars that may never heal.

The second thing that happened was even more spectacular.  The bombs blew loose the seeds of heroes, scattering them all throughout the crowd in thousands of different directions.  Total strangers rushed to tend to the wounded and carry them to safety and medical care.

We saw a graphic picture of a man being carried to safety in a wheel chair by two total strangers.  Both of his legs had been amputated beneath the knees.

One of the rescuers was pushing the wheel chair with one hand and clamping several inches of the victim’s severed femoral artery in his other bare hand so the victim wouldn’t bleed to death.  The line of people wanting to donate their own life’s blood was out the door and all the way around the block.

This is something that cowardly terrorists have never figured out.  They can blow up hundreds of people.  What happens next they can never control nor can they conquer.

The moment the bomb goes off the seeds of heroes are scattered, instantaneously taking root by the thousands.  The history the terrorist intended is rewritten, not in the blood they spilled but in the life blood others give.  What one intends for evil always spawns something of greater good.

After Joseph’s brothers sold him into slavery and then got caught red-handed, they just knew that Joseph would have them enslaved, tortured or killed as payback.  Except, Joseph knew the seed-to-hero scenario God always works.  “‘You intended to harm me, but God intended it for good to accomplish what is now being done, the saving of many lives’” (Genesis 50:20).

Our redemption story is literally written in the blood someone spilled with evil intent that God only used to fertilize the seeds of heroes.