Lance earned a BBA in Computer Information Systems from Baylor University in 1991 and a MA in Religious Education from Southwestern Baptist Theological Seminary in 1994. He has worked in churches in West Texas, Central Texas, and now South Texas mostly with middle school, high school, and college students.

Lance is married to Jennie and they have two teenage children. Leah is an art major at NESA (North East School of the Arts at LEE) and Nick is a computer science major at Texas Tech.

Lance began at Woodland working with middle school, high school, and college students. He quickly added helping with technologies like the website and managing the email.

Now, Lance supervises the Student Minister, works with missions, outreach, and some administration duties like supervising our administrative assistant and custodial staff. With the pandemic, Lance has picked up helping everyone stay connected through online services and Bible studies and Zoom.

Lance loves being with his family, the outdoors, reading, and technology of all kinds.

Worst job you've ever had, and what did you learn from it?

In seminary for a very short time, I worked as a limo driver.

The first run I has was not too bad, even though they had not finished my training. I picked a guy up in a Lincoln at his hotel and dropped him off at the airport.

The second run is a different story. I was supposed to meet with another driver and follow him. I never saw him. So, I got my limo and went to the hotel to pick up a couple for a party in Deep Ellum — the premier arts, music, and culture center of Dallas. We made it to the party and I waited for them on a side street. I heard a gunshot close to where I was waiting and then lots of police were around. It was a carjacking. They eventually left the party, I drove them around for a little while and then to them back to their hotel. When I took the limo back, I dropped off the keys and a note explaining all that happened and informing them I quit.

I learned that training is extremely important!

What advice would you give to your teenage self?

I played the piano from about 5 years old to 9th grade. Sadly, I cannot play today.

In middle school I played the clarinet in band and switched to the tenor sax in 10th grade. I continued to pay these instruments in church orchestras through college. My senior year in high school I was drum major.

What is your favorite board game, card game, or table game?

Our family loves to play games. My favorite is Settlers of Catan.

Do you have any pets? 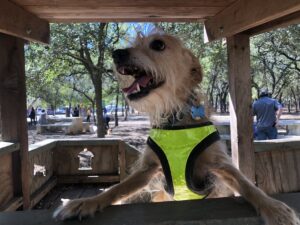 Trek is a terrier mix. 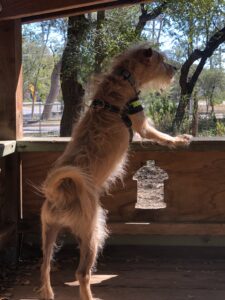 He was found with his three siblings abandoned just off a bike path.