Garrett Vickrey was called to Woodland in June of 2012. He’s a graduate of Baylor University and the Wake Forest University School of Divinity. Garrett was born and raised in Dallas, TX where his father was the pastor of Royal Lane Baptist Church for 26 years. Before coming to Woodland, Garrett served as a Pastoral Resident at Wilshire Baptist Church in Dallas and as the Minister of Youth at Myers Park Baptist Church in Charlotte, NC. He and his wife, Cameron Mason Vickrey, have three daughters in elementary school. Cameron also has a Masters of Divinity degree from Wake Forest and works as an advocate for public schools with Pastors for Texas Children and RootEd.

Garrett is passionate about helping people connect with meaning and purpose in their lives by creating sacred communities of belonging to bring people together around projects that create hope through Christ. He’s a “Spurs-Tolerant” Dallas Mavericks fan who revels in the fierce loyalty of sports rivalry. Garrett is also a musician who has played guitar, piano, mandolin, and accordion in various bands and ensembles in Texas and North Carolina.

He has been active in the San Antonio community and within the Cooperative Baptist Fellowship. He has served on the board of San Antonio’s Faith-Based Initiative and the Interfaith San Antonio Alliance. Along with Rabbi Abraham of Agudas Achim and Mehmet Oguz of the Dialogue Institute, Garrett started an interfaith Thanksgiving Service in 2016. He serves on the board of visitors for the Wake Forest University School of Divinity, the board of the Baptist House of Studies at Perkins School of Theology, the board of Texas Baptist Women in Ministry, the board of BCFS Health & Human Services, and he is the moderator of CBF Texas. Garrett has preached university chapel services at Barea College and Baptist University of the Americas, and he has also spoken at various camps and retreats.

All of 1 John. What else do we need to know about God and who we are called to be? It’s all there.

Put Peace Into Each Other’s Hands

Worst job you've ever had, and what did you learn from it?

Server at Tia’s Tex Mex in Plano, TX. I was a terrible waiter. Balancing drinks is more difficult than it looks.

What advice would you give to your teenage self?

Don’t listen to all the Y2K hype.
Bet on that 7th round draft pick from Michigan— Thomas Brady.

Guitar and piano.
I once played accordion in a youth camp band.

Do you have any pets? 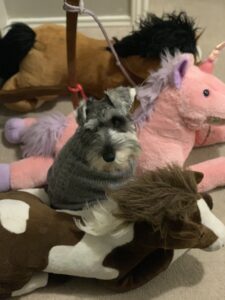 Moose Dumbledore Vickrey is a miniature schnauzer who joined our family Christmas Day 2019.