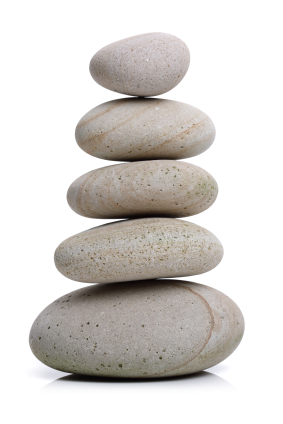 When David went to battle Goliath he took five smooth stones. Five? Why not four? Three? Wouldn’t two stones show more faith in God? No. David didn’t lack faith; he lacked certitude. Look over one shoulder as far as you can, then as far as you can see over the other shoulder. Somewhere beyond the horizon on one side is faith and the other certitude.

Goliath had certitude. He was absolutely certain he could kill any Israelite who faced him. Goliath insulted the Israelite soldiers every morning and every evening. His voice roared over the hills. He had a bearer carrying his shield before him, turning it from side to side to flash light on Goliath‘s cruel, cocksure face. Goliath waved his sword over his head and the mountains rang with cheers.

David came forth with five stones and a slingshot. If David had certitude he would have twirled his sling like a child while the high places echoed curses, jeers and ridicule. He would have held up one smooth stone, showing that was all he needed to defeat this giant. Certitude comes with a lot of showmanship and pride.

All humans live somewhere along that continuum between faith and certitude whether its news, history, religion, politics, geography, science, math, whatever. Scientists and mathematicians cling to certitude, except for the futurists who have visions and dreams that cannot be tested yet, and still look for certitude to prove their belief. Some religious people require certitude. If you keep all the laws, check off all the commandments, fulfill all the requirements, then you can be certain that you will go to eternal bliss, or at least purgatory, and not the bad place.

Some people live by faith. They accept few things as certain and many things by faith. I have little confidence in news, a little more in history by reputable writers, and a great deal in the arc of human history that includes fossil, archeological, astrophysical, chemical, biological history, with many questions, theories and things unknowable.

Leslie Weatherhead, a Methodist/Congregationalist English preacher wrote a book titled, “Christian Agnostic.” I thought all Christians were agnostics in the sense that we don’t know much about God, but we have faith in our knowledge of God through Jesus Christ. The many things we don’t know and can’t understand aren’t a stumbling block. That is the human condition and we try to walk by faith, not by knowledge.

You have to locate yourself on the continuum by finding where you are most comfortable. Do questions excite you and inspire you to find answers? Do you prefer steps and formulas? Remember the man referred to as “the rich young ruler.” He had obeyed all the laws and checked all the boxes, What did he lack?