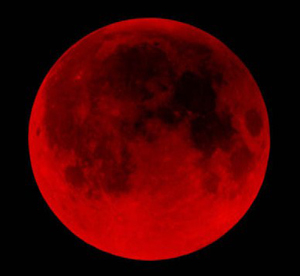 Pastor John Hagee has just announced to his San Antonio congregation (and worldwide audience) that there will be a world-shaking event sometime between this April and October 2015. Yes, that’s correct. He is predicting that sometime within the next year and a half a significant event will happen somewhere in the world. And he knows this from looking at the skies, which are “God’s billboard”. Four “Blood Moons” corresponding with feast days of the Jewish calendar mean that something significant is going to happen on earth.

This prediction was on the home page of the San Antonio New-Express website on Sunday morning. Hagee’s 20,000 member church is just down the road from us here in San Antonio. His apocalyptic fervor is for better or worse a part of the cultural fabric of San Antonio. When people think of Christianity here in our city they most likely think first of Cornerstone’s flashing digital sign on the outer loop of town displaying Hagee’s image.

The difficulty is that Hagee seems much more interested in the spectacle of what the bible might tell us about geopolitical struggles than the transformative power of sacrificial love that saturates the red letters of the New Testament. Indeed, his sources for this bold new prediction seem to be more astrological than biblical. Jesus’ apocalyptic word to his disciples in Mark 13:32, “About the day or hour no one knows, neither angels in heaven, nor the Son, but only the Father”, need not be tempered with modern Astrology. After all, did Jesus even know then that he was Capricorn? Regardless, Jesus seems pretty certain of two things concerning the end times in scripture:

We can lose ourselves in speculation when we put down the bible and look within to the fears that chain us to selfishness and pride. This is a temptation for every church and every Christian. However, when we do this we conjure a Christianity content to focus on what Walter Rauschenbusch referred to as “Weaving the tinsel fringes for the garment of religion” (Christianity and the Social Crisis, 7). This weaving may lead to some semblance of inner peace, but not to the lasting transformative work in which God’s spirit invites us to participate.

Too much of Christian witness today is more spectacle than substance. There is substance out there, yet it is overshadowed by the spectacle of end times prophesies or publicity stunts. Consider the past few years where we have seen a pastor in Dallas spent a 24 hours live in a bed on top of his church sitting their with his wife. Why? To make the point that Christians need to talk more about sex. A few months ago a church in Kentucky made headlines by giving away firearms to guests visiting their church. Why? To get people in the doors. Years ago, Oral Roberts threatened in January 1987 that he needed to collect $8 million by March to fund a hospital he was building — or else. He said. “We’re at the point where God could call Oral Roberts home in March.” He got the money and opened the hospital. It closed two years later.

Too much of our religious fervor has been reserved for spectacle and prophesy that has little to do with the life saving mission of Jesus Christ. Our spiritual zeal is tapped out by prophesies and stunts intended for shock and awe. These ploys feed our fears instead of inspiring us with love and compassion for God’s world. Instead of sending us out two by two to proclaim the gospel and heal, we scramble for bottled water and head for our bunkers to wait out the worst.

It’s not just Hagee and Oral Roberts who give in to this temptation to spectacle; it’s me. I read the Sermon on the Mount, and skip over the end of Daniel. My church passes out cookies to guests (delicious cookies!). I tell our church members if you gave a little more to the budget we could really dream big. We seem to fail at every turn—Always choosing the circus over the sanctuary. We will give anything— guns, iPads, cookies, money— when what Christ really demands is that we risk ourselves. This temptation lurks around every corner of life and ministry.

A blood moon is rising. Things are changing. Like the moon reflecting the light of the sun, let the moon be a reminder to you of God’s peace reflected in you. And when the world shakes, remember the last words of Jesus to his disciples at their final meal together, “Take courage; I have conquered the world.”