The Parables and Pandemic: How many times shall I forgive my brother or sister who sins against me? 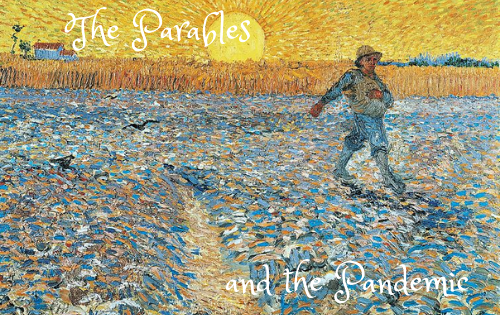 Then Peter came to Jesus and asked, “Lord, how many times shall I forgive my brother or sister who sins against me? Up to seven times?” Jesus answered, “I tell you, not seven times, but seventy-seven times.

Therefore, the kingdom of heaven is like a king who wanted to settle accounts with his servants.  As he began the settlement, a man who owed him ten thousand bags of gold was brought to him. Since he was not able to pay, the master ordered that he and his wife and his children and all that he had be sold to repay the debt. At this the servant fell on his knees before him. ‘Be patient with me,’ he begged, ‘and I will pay back everything.’ The servant’s master took pity on him, canceled the debt and let him go. But when that servant went out, he found one of his fellow servants who owed him a hundred silver coins. He grabbed him and began to choke him. ‘Pay back what you owe me!’ he demanded. His fellow servant fell to his knees and begged him, ‘Be patient with me, and I will pay it back.’

But he refused. Instead, he went off and had the man thrown into prison until he could pay the debt. When the other servants saw what had happened, they were outraged and went and told their master everything that had happened. Then the master called the servant in. ‘You wicked servant,’ he said, ‘I canceled all that debt of yours because you begged me to. Shouldn’t you have had mercy on your fellow servant just as I had on you?’ In anger his master handed him over to the jailers to be tortured, until he should pay back all he owed. This is how my heavenly Father will treat each of you unless you forgive your brother or sister from your heart.”

One of the things I’ve noticed about this strange time in which we find ourselves is the plethora of instructions we need to master. The assortment of these precepts is mind-boggling – there are guides for avoiding the virus (social distancing, hand washing, immunity-building,  etc.); there are guides on what to do if you think you might have the virus (testing, breathing exercises, hydrating, etc.); there are guides on what to eat, how to spend your time, as well as how to stay fit, and so many other things. It’s almost as if we need a universal guidebook to mentor us through this demanding experience.

I think the author of Matthew’s gospel sensed a similar need for the people in his congregation. After the ascension of Jesus, the church was forming in what had to be vacillating ways. So much so, that this author began to pull the life and teachings of Jesus together in catechismic fashion, organizing things in succinct order for memorization and implementation. A good example of this is the Sermon on the Mount, but there is also that collection of parables that he has pulled together in what is now known as the 13th chapter of his gospel. However, that list of parables was nowhere near complete, and the rest of Matthew is seasoned with parables to illustrate Jesus’ teaching and preaching. Such is the parable for today.

This parable comes as a result of an interesting exchange between Simon Peter and Jesus. Simon Peter asks how much forgiveness one person is required to give. He employs the rabbinic formula that states that we are required to forgive three times. Simon Peter, in his customary blustery manner, doubles that number and adds one more for good measure, going well beyond the norm.

Jesus’ response is telling in many ways. For one thing, Jesus talks about forgiveness as if it were a process, a continual effort, almost in an appendage to his exhortation in the Sermon on the Mount to keep on seeking, asking and knocking. Secondly, the parable is vintage Jesus hyperbole, an outlandish story involving a debt of ten thousand talents owed to a king by a slave. You may remember that a talent is equivalent to fifteen years’ worth of daily wages, so the amount owed to the king is gargantuan. In contrast, the debt owed to the slave by a fellow slave is 100 denarii, minuscule in comparison. The hearers of this parable would have been amused and incensed by the unfairness of it all, and then startled to realize that forgiveness isn’t dictated by law, but by spirit. It is an example of Jesus’ petition in the Lord’s Prayer, “forgive us as we forgive.”

Forgiveness is a spiritual discipline, sure enough. It’s also good therapy. Scott Peck, long before he became a follower of Jesus, wrote in his enormously popular book, The Road Less Traveled, “The process of forgiveness –  indeed the chief reason for forgiveness –  is selfish. The reason to forgive others is not for their sake . . .The reason for forgiveness is for our own sake. For our own health. Because beyond that point needed for healing, if we hold on to our anger, we stop growing and our souls begin to shrivel.” Rabbi Levi Meir, a Jungian psychologist and counselor, said something to the effect that unresolved anger is like psychic cholesterol that will ultimately kill you. However, I would submit to you that forgiveness is not just a therapeutic tool; it is a spiritual necessity. Forgiveness is the remarkable ability to look into the heart of God and realize the ultimate significance of all that we say and do.

On this day we come not only with a sense of needing forgiveness, but also with the realization that we need to grant forgiveness. An Ernest Hemingway short story tells about a remorseful father who published an advertisement in the Madrid newspaper, “Paco, meet me at Hotel Montana noon Thursday. All is forgiven…Papa.” Because Paco is such a common name in Spain, the next day 800 young men showed up. Pause for a moment to consider the pathos of that story and the often unrecognized need for forgiveness, granted and received, in our lives.

You probably know the story of English clergyman John Newton who authored some great hymns, including “Amazing Grace.” He was a prolific hymnist, writing over 280 hymns during his lifetime, but before his spiritual conversion Newton participated for years in the cruel African slave trade. When he penned the phrase a “wretch like me,” he wasn’t just using poetic hyperbole. He was a wretched offender in the worst sort of way. However, in his conversion, when he was confronted with Christ, he transformed into a symbol of the amazing grace of God, becoming a pastor and an ardent abolitionist. Can you sense the irony here? A hymn from the heart of a former slave trader has become beloved by scores of African-American congregations, even serving as an inspirational anthem for the American civil rights movement. And here is one more irony… While Newton wrote the words, we don’t know who wrote the tune. Some have surmised, with some justification, that it is probable that the tune evolved from the oral tradition of African folk music. All of this is because one man was confronted for the greater good, the great grace of Jesus Christ.

And the good doesn’t end there… You see, we, too, participate in this parable of Jesus. He has revealed to us an amazing grace, sure enough. Now, all Jesus asks is that we emulate him and grant such grace to others. Can we do that? It is a defining question for us, individually and collectively. May God help us to answer affirmatively.

E. Claiborne Jones tells about a man who had been on the outs with the church since he was a teenager. Finally, after his family had pleaded with him to go to church again, he reluctantly agreed. He wandered into an Episcopal Church during the middle of the service where the congregation was on its knees praying the Prayer of Confession: “We have done those things which we ought not to have done, and we have left undone those things which we ought to have done . . .” The man broke into a smile and said to his family, “Good! Sounds just like my kind of crowd.” Today, let us pray for forgiveness.

A Musical Guide for Prayer:  Written by Gordon Sumner, performed by Sting

Under the ruins of a walled city
Crumbling towers and beams of yellow light
No flags of truce, no cries of pity
The siege guns had been pounding all through the night
It took a day to build the city
We walked through its streets in the afternoon
As I returned across the field’s I’d known
I recognized the walls that I once made
I had to stop in my tracks for fear
Of walking on the mines I’d laid