Taking a Mediterrean Vacation with St. Paul as a Guide: “…to the praise of His glory…” 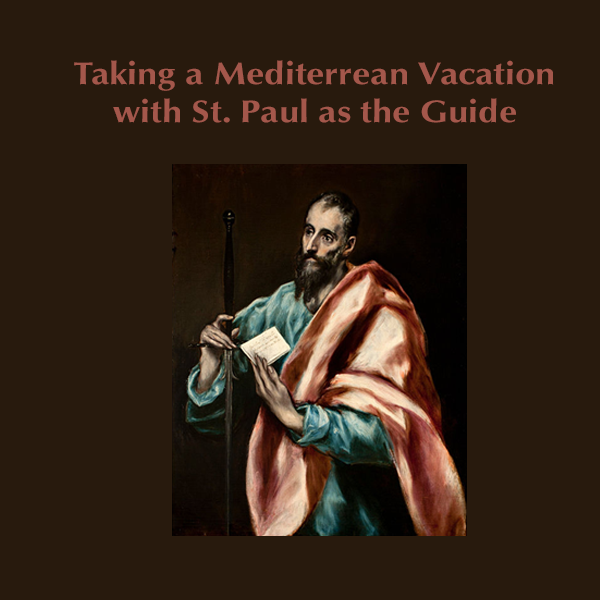 Paul, an apostle of Christ Jesus by the will of God, to the saints who are in Ephesus and are faithful in Christ Jesus: Grace to you and peace from God our Father and the Lord Jesus Christ. Blessed be the God and Father of our Lord Jesus Christ, who has blessed us in Christ with every spiritual blessing in the heavenly places, just as he chose us in Christ before the foundation of the world to be holy and blameless before him in love. He destined us for adoption as his children through Jesus Christ, according to the good pleasure of his will, to the praise of his glorious grace that he freely bestowed on us in the Beloved. In him we have redemption through his blood, the forgiveness of our trespasses, according to the riches of his grace that he lavished on us. With all wisdom and insight he has made known to us the mystery of his will, according to his good pleasure that he set forth in Christ, as a plan for the fullness of time, to gather up all things in him, things in heaven and things on earth. In Christ we have also obtained an inheritance, having been destined according to the purpose of him who accomplishes all things according to his counsel and will, so that we, who were the first to set our hope on Christ, might live for the praise of his glory. In him you also, when you had heard the word of truth, the gospel of your salvation, and had believed in him, were marked with the seal of the promised Holy Spirit; this is the pledge of our inheritance toward redemption as God’s own people, to the praise of his glory.
–Ephesians 1:3-14

One of the common things that I hear from you at Woodland and from friends in other churches is how much we all miss physically worshipping together. Obviously, as we’ve seen in news reports, this is difficult for worshippers around the world. I’m thankful for our pastoral leadership team who have been diligent in creating our virtual worship experiences. For me, these times offer gratitude for the week completed, guidance for the week ahead, and the welcome recognition that I am not alone. One of the remarkable benefits of worship is its ability to turn our minds and hearts from lamenting the world as it is toward a perspective of gratitude for the overarching grace of God. This spiritual practice of giving thanks and praise, which we know as doxology, is vital for health – physical and spiritual.

I began to think more about this several years ago, when I criss-crossed the country visiting a number of different churches – from Seattle to Orlando, from New York City and Chicago to Los Angeles. Specifically, I was involved in a project studying churches with innovative approaches in relating to young adults. One thing I noted about their worship was that, although I heard a lot of energetic “praise songs”, few of those churches seemed to me to incorporate a sense of doxology into their worship. Now, I suppose a word of explanation is in order here. Doxology is, in the traditional sense, a hymn, a piece of music, sung in many churches — “Praise God from Whom all blessings flow…” The Gloria Patri and the sung Lord’s Prayer are also forms of doxology. More importantly, though, “doxology” has a broader meaning. It is really an effort to respond in awe and gratitude for the indefinable, inexpressible Mystery that we call God. A sense of the Holy is intensely personal. For me, Daniel’s preludes are a deep doxology every week. What is it that evokes that sense for you?

Today’s Scripture is a doxology, an effusive, grateful outburst of praise beginning with the word, “Blessed,” and ending with the phrase, “to the praise of His glory.” The eleven numbered verses are actually just one long, breathless Greek sentence, composed by an inspired author!

This “doxology” is the beginning of a letter traditionally regarded as having been written by Paul from his Roman prison, although some scholars believe that it may have been written by one of his associates after his death. It was a common and accepted practice within the biblical tradition of the ancient world to write in the name of a revered figure, and so, if this were the case, although it may seem strange to our modern perspective, the letter would have still been valued as a valid expression of the faith of the apostle. It is also believed that the letter was meant to be a circular letter shared by many regional churches, which would explain why there are no personal references to Paul’s deep and long-lasting friendships in the church at Ephesus where he spent so much time and had much personal investment. Those historical questions are fascinating. However, for the meaning we find in its teaching, we will simply take the letter at face value and consider it to be from Paul to the church at Ephesus.

The structure of Ephesians is more like a sermon than a letter. And if that is the case, then this introduction we are considering today is more like a hymn. You might even consider it as the special music right before the sermon itself. But as in all worship, music is vital to the experience. It has been said that singing is perhaps the purest form of prayer.

Back in the days of the Civil Rights Movement in the South, Will Willimon remembers attending a freedom march. He, along with many other students, had gathered to march for justice, to bravely stand up and be counted, to demand that the government do something for the rights of African-Americans. Will said that he was astounded that the first thing the organizers of the march made them do was to gather in a hot, rural black Baptist church for hours of endless singing and praying and preaching. The white students got edgy. “Let’s get on with the real work of justice. Let’s get out on the streets where we can do some good. What does all this singing have to do with the work at hand?” The organizers patiently reminded the students that they had been at this a lot longer than they had. They told the students that they were not contending against a few bad laws or people; they were struggling against principalities and powers, against cosmic evil. “If all we have to sustain us out in the streets,” they said, “is optimistic humanism, then we won’t be here long.” What Will and those others discovered was that they were there to be in church, to be reminded of Who called them together, Who sent them out, Who marched with them. Will said that he discovered in that little rural church that the most important revolutionary act he could make was to sing a hymn, praise God, and trust God. He said, “Praise always precedes Christian action, calls it forth, sustains it. We love — in the streets, in the office, at school — because we have been loved.”

Worship is vital for us as the church, and as we glean from this Scripture passage, worship is formed by grateful praise – doxology! Therefore, sister and brothers, let us, in W.H. Auden’s words, “stagger onward rejoicing.”

Skin remembers how long the years grow
when skin is not touched, a gray tunnel
of singleness, feather lost from the tail
of a bird, swirling onto a step,
swept away by someone who never saw
it was a feather. Skin ate, walked,
slept by itself, knew how to raise a
see-you-later hand. But skin felt
it was never seen, never known as
a land on the map, nose like a city,
hip like a city, gleaming dome of the mosque
and the hundred corridors of cinnamon and rope.

Skin had hope, that’s what skin does.
Heals over the scarred place, makes a road.
Love means you breathe in two countries.
And skin remembers–silk, spiny grass,
deep in the pocket that is skin’s secret own.
Even now, when skin is not alone,
it remembers being alone and thanks something larger
that there are travelers, that people go places
larger than themselves.