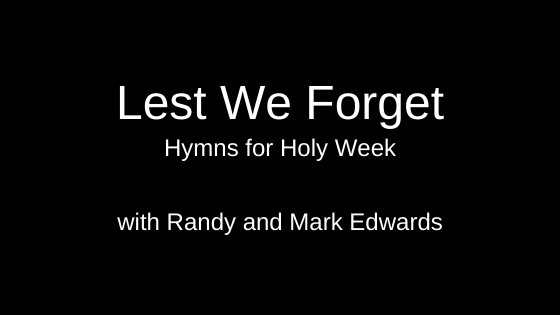 Then they came to Jerusalem. And he entered the temple and began to drive out those who were selling and those who were buying in the temple, and he overturned the tables of the money changers and the seats of those who sold doves; and he would not allow anyone to carry anything through the temple. He was teaching and saying, “Is it not written, ‘My house shall be called a house of prayer for all the nations’? But you have made it a den of robbers.”
–Mark 11:15-18

One of the things that makes me angry these days is to see preachers (And I use the term “preachers” rather than “ministers”, because these men would rather preach than minister.) refusing to close their churches during the pandemic. With all of the evidence pointing to social distancing, their need to have worship services is maddening. Perhaps Jesus’ actions on this Monday speak to this issue, because on that Holy Week Monday Jesus cleansed the Temple.

To get a picture of this event it is important to understand the enormity of the Temple complex. Instead of one worship center, it was a huge campus with several buildings (Think in terms of the Vatican complex in Rome.) that served a variety of purposes. Religiously, it was the gathering place for folks who journeyed for the major festivals; it was a place of prayer for all peoples; it was the only place in the Jewish world where sacrifices could be offered.

But it represented more than just religion – it was a symbol of the nation Israel, something akin to the Capitol building in Washington, D.C., or the Statue of Liberty in New York City. It was also the site of numerous Temple-related businesses. Like the modern-day Vatican, it was a small city of specialized workers. In addition to the priests, a host of artisans and merchants were required just for maintenance purposes. On a regular basis the Temple employed carpenters, stone masons, gold- and silversmiths, butchers, bakers, shepherds, doctors and ditchdiggers . . . all paid from the Temple treasury. For instance, according to the Mishna, the written collection of Jewish oral tradition, 82 women worked full-time to weave and repair the curtains. In the Temple there was also the equivalent of the national bank. And during Passover, it would have resembled our American 4th of July, with people celebrating their freedom with patriotic as well as religious fervor. (By the way, that was why Pilate came to Jerusalem with his soldiers. He wanted to make sure the Jewish patriotism didn’t get too out of hand.) The backdrop for Jesus’ acts was huge and complex.

This scene of Jesus depicts him in a manner that makes us a bit uncomfortable. It doesn’t jibe with our cherished image of Jesus . . . You know, the one who consistently turned the other cheek, loved his enemies, and refused to buck opposition. The Jesus we know and love was unfailingly kind toward children, longsuffering toward sinners, and gentle toward strangers. The titles we ascribe to him reflect his placid nature: “Good Shepherd,” “Lamb of God,” “Prince of Peace.” In popular piety we have taken this image of a gentle Jesus and made it into a full-blown caricature. Christian art depicts him as soft, harmless, and passive; and many of us prefer to keep him that way. We like Jesus just the way we’ve made him — sweet . . . “Sweet Jesus.” This scene in the temple is startling, because it confronts us with a side of Jesus we are reluctant to face – the angry Jesus.

All four of the Gospel writers seem to agree on this point. Jesus was mad. But why was he mad? While some would say that he was confronting the money changers, because they were taking advantage of the pilgrims, others would say that he was making a statement against the Temple itself. And while there may be some truth in all of that, I believe that the thing that infuriated Jesus was the dilution or corruption of what he declared to be the Temple’s ultimate purpose, serving as a “house of prayer for all people.”

Amy-Jill Levine, the brilliant Jewish scholar who teaches New Testament at Vanderbilt Divinity School, points out that the key to Jesus’ actions can be found in Jeremiah 7:9-11. His accusation comes directly from these verses, “Has this house, which is called by my name, become a den of robbers in your sight?” Dr. Levine goes on to say that “a den of robbers” is where robbers have gone after they’ve taken what does not rightfully belong to them. The Jeremiah scripture is about Jeremiah condemning his own people for riotous living, a transgression that would be punished when the Babylonians eventually destroyed the Temple, along with most of the rest of Jerusalem. Dr. Levine’s take on this is that what Jesus was attacking in the Temple was the hypocrisy and false piety on exhibit by all who were coming. They were simply boasting of their faithfulness to God without being righteous and just. Dr. Levine’s insight has made me take another look at this depiction of Jesus, and it has caused me to cringe with its ramifications for us.

During my sabbatical at the USC Film School years ago I had some of the most significant spiritual conversations of my life. After the students and professors realized that I wasn’t on some kind of holy crusade to convert them and the school, they began to ask me interesting questions about faith. Their questions resulted in some meaningful discussions that inspired my personal spirituality… so much so, that by the time I returned home I decided that I was going to try to create opportunities for conversations about faith outside the church. So, I went to several people in the city who I knew to be persons of integrity who were not affiliated with church. I asked them if they would consider getting together every now and then just to talk about their beliefs. I promised them that I was not out to try to coerce them into becoming church members, but that because I respected them, I wanted to learn from them.

Six of the folks I asked agreed to do so. However, just to test my willingness, they scheduled the first meeting in a bar in the heart of the city. I didn’t flinch, but I did tell the Deacon Chair what I was up to, just in case some Baptist eyebrows were raised. We met for nearly a year, and I grew to greatly appreciate the thoughtfulness of those in the group. However, I won’t soon forget something that came out in one of the first meetings. One of the men said, “You know, Mike, I might consider becoming a member of your church, but the truth is, some of your church leaders who act so pious on Sundays are ruthlessly deceptive in their dealings the rest of the week.” Those words startled me then; they startle me now, because I think that is something that makes Jesus angry.

I mean, here we are in a church that preaches the words of Jesus in such forthright ways. But how seriously do we really take the words of Jesus? Are we people who practice the teachings of the Sermon on the Mount away from the church? It makes me aware, especially in this strange time of coronavirus that my neighbors are looking closely at my actions. Do they catch a glimpse of Jesus? I want them to, and I’m going to try earnestly to be more intentional about the things I know are important to Jesus and the Kingdom.

When we were studying at Oxford, I remember seeing a sign over the door of the Staunton Harold Church in Leicestershire, England, that read:
“In the year 1653 when all things Sacred were throughout ye nation either demollisht or profaned, Sir Robert Shirley, Baronet, founded this Church whose singular praise it is to have done the best things in ye worst times, and hoped them in the most calamitous.”

I hope that someday the same thing could be said of us, don’t you?

A Poetic Guide for Prayer:  Malcolm Guite’s “Cleansing the Temple”

Come to your Temple here with liberation
And overturn these tables of exchange,
Restore in me my lost imagination,
Begin in me for good the pure change.
Come as you came, an infant with your mother,
That innocence may cleanse and claim this ground.
Come as you came, a boy who sought his father
With questions asked and certain answers found.
Come as you came this day, a man in anger,
Unleash the lash that drives a pathway through,
Face down for me the fear, the shame, the danger,
Teach me again to whom my love is due.
Break down in me the barricades of death
And tear the veil in two with your last breath.