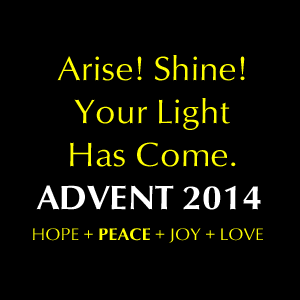 Terrible things have happened throughout history in December. Enron collapsed a decade ago, shedding light on corruption on Wall Street. Bernie Madoff was arrested—same story. The Indian Ocean Tsunami in 2004 killed over 200,000 people the day after Christmas. Just two years ago a 20 year-old kid with a machine gun killed 20 children and 6 teachers at Sandy Hook Elementary. And who could forget the day that lives in infamy, December 7, 1941, when Pearl Harbor was bombed?

For a month when so many bad things have happened, there is still plenty of cheer this time of year. We hang joyful lights to brighten the darkness, and we dream of what world peace might look like.

We do this to honor the prince of peace born to us in Bethlehem. A light that outshines the darkness. Colossians says, “He has rescued us from the power of darkness and transferred us into the kingdom…” The power of the darkness can seem overwhelming. Each day we hear more terrible news of ISIS and Ebola. Fears grow exponentially. There are wars and rumors of war.

Yet, this is the season to remember the One who has conquered death. And the One in whom we gain the promise to be raised to newness of life in God’s Kingdom. The kingdoms of this world promise peace. But, they cannot fulfill that promise without bowing to the lowly king in the manger. He breaks the cycle of violence by allowing himself to be broken. And he is raised to prove that unlike the kingdoms of this world who rule by the power of death, God’s Kingdom rules by the power of love which conquers all evil, even death.

Peace on earth? Maybe not this year. But, one day. At least, that’s the birth we await.