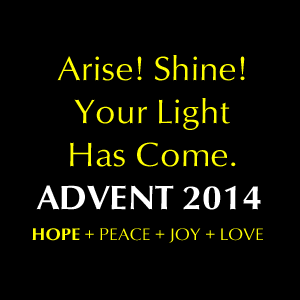 One year, during Advent, Nancy was digging through some digging and came across a little box my father passed along to me after my mother died. Inside the box, among other things, was my first pair of shoes. In that it was Advent, seeing those shoes and thinking of Jesus in the manger made it all a very spiritual moment. It occurred to me that God once became small enough to wear a pair of shoes that tiny.

One Sunday I stopped to ask Cameron Vickrey. She was holding Zetta, their beautiful then-11-month-old daughter. When you speak to Zetta, her smile is so big that it kind of swallows her whole face. Her eyes literally sparkle. It all came back to me again. “Isn’t it something,” I asked Cameron, “that God was once that small?”

It’s natural enough to think of eternal God as big, kind of grandparent-like, sitting on a throne being worshipped by all the angels of heaven, holding a scepter of holiness. It’s counter-intuitive to actually ponder the size of God, small enough to fit into a human mother’s womb or a baby’s shoes.

To me, there are no more powerful words in all of scripture than John’s, “the Word became flesh.” I simply cannot get over the magnificent mystery of it all! God, flesh, all in one place at one time.

The apostle John didn’t spend any time telling us about frankincense and myrrh or shepherds keeping watch. He was more interested in the bigger picture of how God became so small and what that meant to you and me and the whole world for all of time. I just can’t wrap my mind around it! Jesus was once God on the cellular level.

“Long lay the world, in sin and error pining, till he appeared and the soul felt its worth.” Those words from one of the greatest gospel songs ever written, “O Holy Night,” say it all. God appeared. The invisible became visible for a moment in time that changes the meaning of all moments of time forever.

Christmas means that God has, indeed, walked a mile in our shoes.