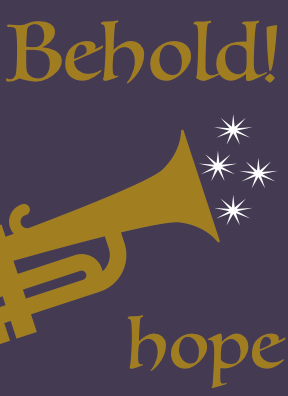 The New Testament in Modern English paraphrases verse 19 as “the whole creation is on tiptoe to see the wonderful sight of the people of God coming into their own.” What an exciting image!  But too often I forget that sometimes the hope these verses describe is produced by persevering through suffering. I want the end goal without the work it takes to get there. Mary was described by the angel as “highly favored” or “blessed among women,” but don’t forget her “blessing” included being a teenage, unwed mother, having her baby in a stable because there was no room for them in the inn, and watching her beloved Son be rejected and crucified on a cross. Doesn’t sound like much of a blessing, does it?  But the end result is glorious! Three truths in these verses and those that follow bring us much HOPE not only in this advent season but always. God says:

BEHOLD I have a purpose!  In the end, you will have “liberation from decay” and have the “glorious freedom as children of God.”

BEHOLD I will walk with you through your sufferings and I have given you the Holy Spirit who intercedes for you!

BEHOLD I will make you more than conquerors through HIM who loved us!  Nothing can separate you from MY love.

In Suzanne Collins Hunger Games, President Snow tells head game maker, Seneca Crane, that, “Hope is the only thing stronger than fear. A little hope is effective, a lot of hope is dangerous.”  Let’s HOPE dangerously this advent season!